✮ ✮ ✮ ✮ ✮ …“I’ve heard nothing but glowing reports on the show… seems a fair number of the audience were our staff – says something when the team are buying tickets! Many thanks to you, and all of the band and team for all of your work and input into the event. (Theatre Manager – Guildhall Derby)

The Blues Brothers started out in 1978, created by comedy actors Dan Ackroyd and John Belushi as part of a musical sketch on the American TV show, “Saturday Night Live”. It wasn’t long before the band began to take on a life beyond the confines of television, releasing an album in 1978, Briefcase Full of Blues, and then having a Hollywood film, The Blues Brothers, created around its characters in 1980. And the rest, as they say, is history…

Now, “The Blues Brothers Experience” recreates all the iconic atmosphere of a live performance of The Blues Brothers – capturing the essence of both the music and the film – in a stage show / concert experience that electrifies!

This live ten-piece band produces music that will thrill you, and a performance so much like Dan Ackroyd and John Belushi that you will long remember the evening you decided to immerse yourself in “The Blues Brothers Experience”! 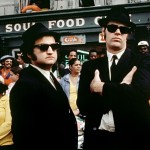